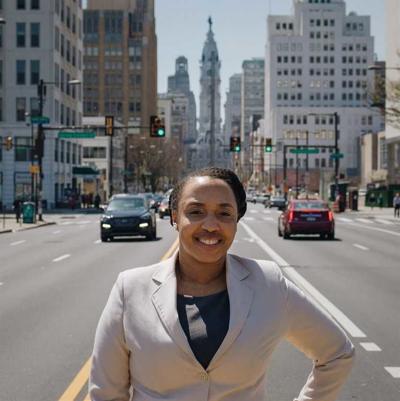 Thirty-four developments are under construction, completed or proposed for the North Broad Street corridor between City Hall and Germantown Avenue.

“A lot of that development is commercial and mixed use which means that these developments are going to bring some type of additional businesses on North Broad that we are hoping that will lend to the unemployment rate within our Census tract,” said Shalimar Thomas, the executive director of the North Broad Renaissance.

“When we started almost four years ago, we went to the community and one of the things that they asked is for North Broad to be a more of job creator for the community and so we looked at what does that mean for our demographic. The idea was that we try to do some strategic place making by attracting the right type of businesses to the right area, that can help hire from the community but also help complement the development and the current infrastructure that is already there.”

To that end, organization leaders envision incorporating four employment districts including an arts and culture district, a health district, a professional services district and a tech district.

“The idea is that we try to icentivize businesses that fit those categories to locate within those districts because by doing so that business will be in a position to more successful, but we can also work on hiring local residents from the corridor and around the corridor,” Thomas explained.

The North Broad corridor is home to approximately 49,492 residents, and the population is expected to grow.

There are about 1,300 businesses providing more than 29,000 jobs in the area. And commercial properties — office space, restaurants, retail stores — represent the majority of the $2.2 billion in assessed property value along North Broad Street.

The North Broad corridor is home to 14 federally qualified Opportunity Zones, which are designed to encourage investment in distressed communities by providing tax incentives to investors. The zones are anticipated to help spur $100 billion in private capital investment around the country.

“I think that we’re in a key position with the Opportunity Zones,” Thomas stated.

“There are no job requirements or community partnership requirements. It’s just to say that if you invest in this you’ll get some capital gains deferred.”

She said they envision investors supporting an Opportunity Zone fund that would be used to provide loans and grants to small businesses who want to move to the corridor.

According to the report, North Broad is well positioned for revitalization for that benefits current and future residents. The corridor’s positive attributes include an active housing market, growing demand for entertainment and commercial uses, a strong transportation network and an engaged community working to improve cleanliness, maintenance and landscaping.