Guests were ushered into the School District of Philadelphia’s lobby by the claps and cheers of volunteers eager to see the often-neglected corridor receive a little TLC and financial investment. 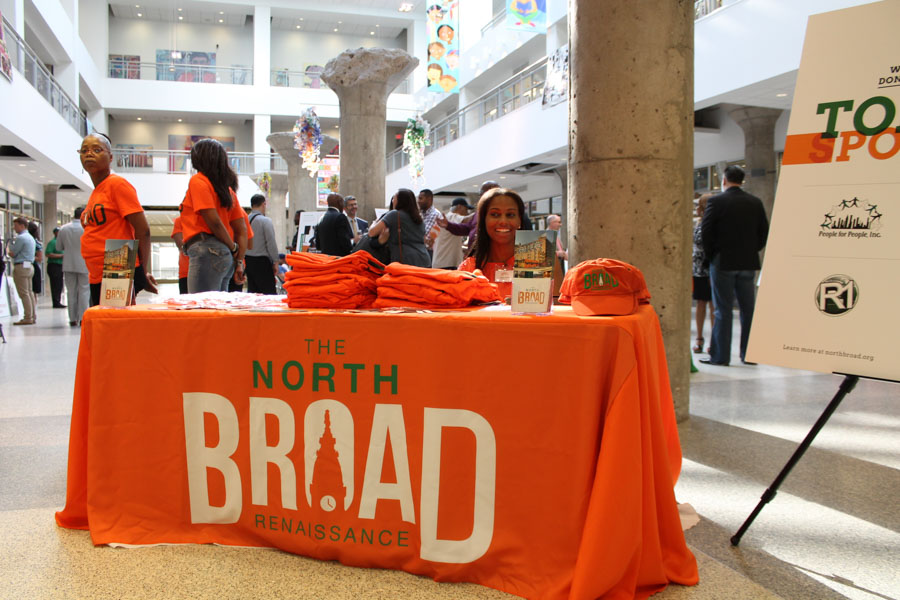 The volunteers were mostly younger African-American women, all dressed in orange t-shirts that said “#thinkbroad” on the back. Though they welcomed guests for more than an hour, their applause and smiles never faded.

The party offered community members, stakeholders and the team behind the North Broad Renaissance (NBR) a chance to celebrate their five-year-plan and toast to a more hopeful future.

Thomas is a rising star in Philadelphia. Named one of Philadelphia Business Journal’s 40 Under 40, Thomas transitioned from Kenyatta Johnson’s media and communications director to the executive director of the African American Chamber of Commerce before signing on as the executive director for NBR. Throughout, Thomas has managed her own boutique public relations firm, a peace of PR. 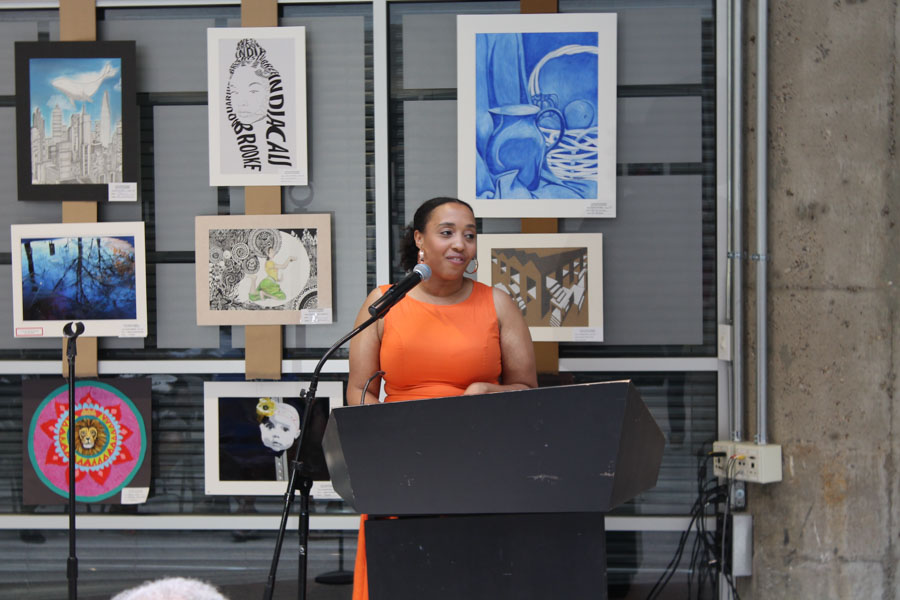 Shalimar Thomas outlines the NBR’s plan for the next five years./Shane English

Established in 2015, the NBR is a nonprofit focused on generating investment, interest and community involvement like the Avenue of the Arts, Inc. did for South Broad Street. As a voluntary service district, NBR will not tax business along North Broad Street. To remain solvent, NBR must partner with businesses. Currently, the NBR receives $375,000 from the City of Philadelphia and will continue to do so through 2020.

The NBR is an evolution of the Avenue North Renaissance, a nonprofit founded in 2014 and celebrated by City Council President Darrell Clarke. Clarke, a resident of the area and councilman for the 5th District, has advocated for investment in the North Broad Corridor for years, Thomas said.

After thanking attendees for their time, Thomas introduced the chair of NBR’s board of directors, Ken Scott. As an introduction Thomas called Scott “our chairman, historian, scientist,

Scott introduced the vision for a new North Broad Street, one that draws visitors from across the region. He acknowledged, however, that the program was in its earliest stages.

“Of course with every new organization it takes time,” Scott said. “We’ve worked on developing the plan. We hope in the next coming months that you’ll see the fruits of the plan we’ve developed.” 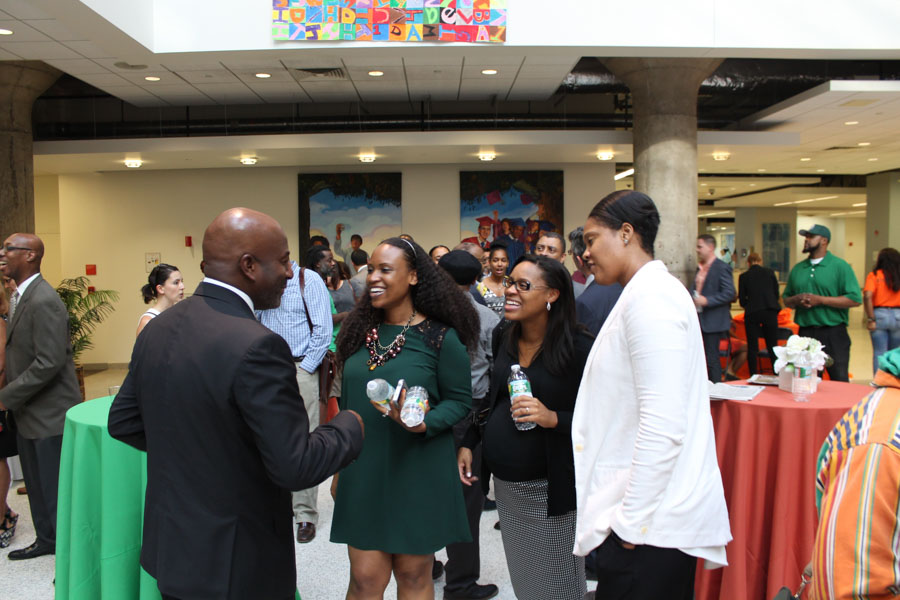 Guests network and mingle following the remarks by the NBR and Commerce Department./Shane English

“We want to galvanize community members to join us in what we call participatory partnership. The first step is awareness,” said West.

West said that he believes a partnership between NBR and People For People, Inc. could bring rarely heard community members into the conversation about the future of the neighborhoods north of City Hall.

Earl Harvey, the owner and publisher of the Black Professionals News, is a long-time North Philadelphia resident, intrigued by NBR’s investment in the communities surrounding North Broad Street.

“I’ve been here since before Progress Plaza broke ground. So now I want to see what this next phase will be,” he said. “I want to know how the business community and the corporate community and the development community can all come to some kind of agreement about how this area is going to look.”

While talking about the future, Harvey smiles with an engaging warmth. As he moves from generalities to the specific issues facing his community, his warmth remains but his smile begins to look forced.

“There are issues about gentrification around Temple University. They’re continuing to eat into some of the traditional neighborhoods,” Harvey said. “We want to know what the solution and resolution is. We want to know how we can all coexist.”

Representatives from the Divine Lorraine Apartments offered a preview of what this Philadelphia landmark-cum-totem-of-gentrification will add to the neighborhood. Pamphlets listing the building’s amenities and sketching out the apartments’ floor plans drew the sort of serious attention usually reserved for window shopping at Tiffany’s. 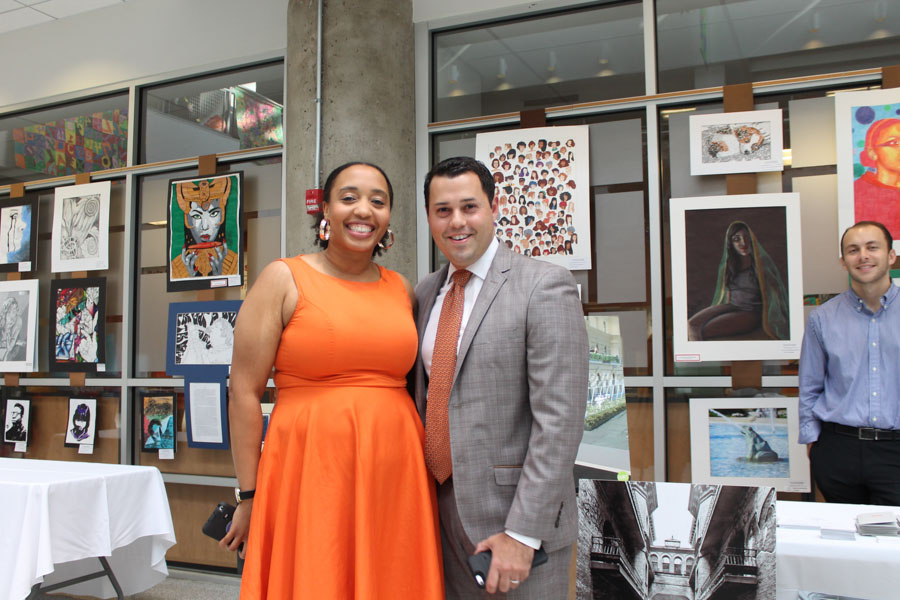 The Divine Lorraine towers over community with a median income of $49,629, per the American Community Survey’s 2014 estimate. The one and two bedroom apartments that rent for $1325 and $2540 per month, respectively, will, without a doubt add a new element to the North Broad corridor.

The NBR’s five-year-plan homes in on four areas that the leaders of the nonprofit believe will result in visible and achievable change, according to the full plan, released on July 1.

The organization’s goals are to improve the infrastructure along North Broad Street, provide incentives for businesses to open along the corridor and to show the rest of the city what North Broad has to offer.

Over the next five years, to make sure that North Broad Street is safe and clean, NBR plans to partner with companies to keep the sidewalks clean and to pair with the police to keep the street safe. So far, NBR has received proposals from companies interested in contracting with the NBR but few concrete details are available.

In addition to cleaning up the streets, NBR is searching for a developer to provide plants and planters along Broad Street. By 2020, NBR aims to have 135 planters along the street. The deadline for proposals passed on June 23 and no announcement has been made since.

NBR’s marketing and business goals are aimed at bringing in new businesses and energy to the North Broad corridor. Within five years, NBR plans to establish a fellowship to involve local students in the development of the community.

Over the next half-decade, NBR plans to provide incentives for businesses to join the growing community. At this early stage, however, NBR has not addressed concrete steps or partnerships to achieve these goals.

The NBR’s five-year plan is ambitious and the team responsible for implementing the plan are passionate and committed to the neighbor.

The North Broad Renaissance has 2020 Vision! By the year 2020, along with our stakeholders, the NBR is looking to reestablish North Broad as the “Workshop of the World,” with amazing infrastructures, businesses, arts and culture and a thriving community.

The North Broad Renaissance is a non-profit that will serve as a Special Service District (SSD) who’s primary role is to provide communication and information to city administrators and Council, neighborhood and community groups and others who are (or may) do business or development or other activities on North Broad, from City Hall to Germantown Avenue. In partnership with community stakeholders, we are looking to revitalize the community, create opportunity, and improve the economic power and overall quality of life along one of Philadelphia’s most prominent corridors - North Broad Street. Top priorities include clean and safe corridors, maintenance and landscaping, marketing and communications and street lighting.

According to research, if they work well, neighborhood commercial corridors make an important contribution to community quality-of-life, especially in pedestrian and transit-dependent lower-income neighborhoods. As North Broad Street becomes a key area of development and revitalization, it’s critical that, collectively, we serve as partners where current and future stakeholders benefit from this revitalization. It’s no secret that this process can be challenging and can have its share of successes and failures, but we look forward to working with the community as we hold each other accountable for accomplishing this goal.